Slide on in to slider's inn

Right on the corner of Peabody and Cooper Young resides the wonderful, locally owned, Slider Inn. After seeing reviews for Slider Inn on Urbanspoon, I decided to give the place a try myself, and let me say, I was not disappointed!

Slider Inn is barely over a year old, and being locally owned adds to the charm to the restaurant.

“Since we are a non-commercial business, we really care about our customers,” waitress Victoria Gibson stated.

Another unique thing about Slider Inn is that they only sell sliders. In case you aren’t quite sure what a “slider” is, they are smaller sized sandwiches served with a tooth pick in the center. Slider Inn carries a wide variety of sliders, ranging from burgers and chicken, all the way to fried eggs, meatballs, or BLTs.

If the waitress who served me was any representation of the service here, let me say that it was exceptional. Her love of the restaurant, really made a difference in the way she served, adding another reason onto the growing list for choosing to dine at Slider’s.

“I really love it here. I love the area, the food, and everyone on staff. This place really feels like home,” Gibson said.

It is not just the staff at Slider Inn who show a love for this restaurant, but their regular customers do as well.

“I love the atmosphere here. The sliders are awesome, and the staff is really cool,” regular customer April stated.

April and her friends enjoy another aspect of this restaurant: their unique, large outdoor patio, which seats about half of the 100 total occupancy for the restaurant.

“One thing some people may not know is that our patio is very pet friendly. We love it when people bring their dogs on leashes to eat outside with them. You could even put your cat on a leash and bring it if you wanted!” Gibson said.

If you are worried about eating outside with the approaching cool weather, don’t be. During the winter months, part of the patio is able to be covered and heated.

Part of my reasoning of choosing to dine at Slider Inn was due to the 79% “like” rate it had on Urbanspoon, which is a generally high rating. While the majority of their reviews are positive, there are some negative ones there as well.

Regarding one of the negative reviews, my waitress told me the story of one woman who posted a review who claimed that after she and her husband were never waited on, they finally left the restaurant. Once the manager at Slider Inn saw this review, he was upset, and decided to check the video footage at the restaurant that day to see which waiter should have attended this particular costumer. After reviewing the video, he found that there was no person who was not attended to that day, or a customer who walked out and left.

“We really care about the reviews we get, and like to see what costumers think so we can try to improve. It really makes me sad that someone would write a review like that,” Gibson said.

So if you do happen to see a review like this on Urbanspoon, don’t let it discourage you from going. I can attest to the quality of food and service of the restaurant. Every waiter and waitress at the restaurant I saw, included my own, were very attentive and friendly to all they served. While the atmosphere of the restaurant is very friendly, the food was above and beyond as well.

I decided to order the mushroom and swiss slider, which has three hamburger sliders with mushroom, swiss cheese, and mayonnaise. Incredible almost doesn’t begin to describe these sliders! The burger was very juicy and full of flavor, cooked just right.  Served with the slider, was their signature fries. These are no ordinary fries, and unlike any others I have seen. The seasonings of both sugar and salt, give the fries a very complimentary differences of taste. A rum flavored mayonnaise is served with the fries, which went with the fries quite well.

Since all food is made fresh daily, including their homemade ice cream, I decided to try some of that as well. I ordered pumpkin flavored ice cream, and was most certainly impressed! Seasoned pumpkin seeds topped the ice cream, while chocolate and raspberry syrup decorated the bottom. You certainly do not want to miss out on trying that. And if all of that is enough to satisfy your taste buds, be sure to try out their homemade lemonade as well! It is definitely worth it.

The only thing to make note of when planning your visit to Slider Inn is that it is a 21 and older restaurant after 5 pm. So be sure to arrive in plenty of time before then.

Overall, Slider Inn is an exceptional up and coming restaurant in the Memphis area. It is a completely unique restaurant and locally owned as well, both of which I find very appealing when we are constantly surrounded by the well known chain restaurants. If you are looking for a different dinning experience, surrounded by friendly people and immersed in a great atmosphere, then Slider Inn is the place for you. 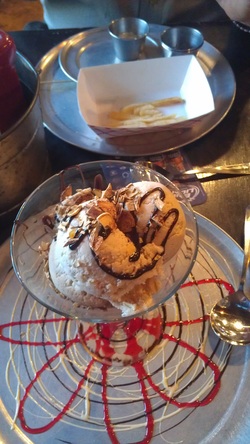 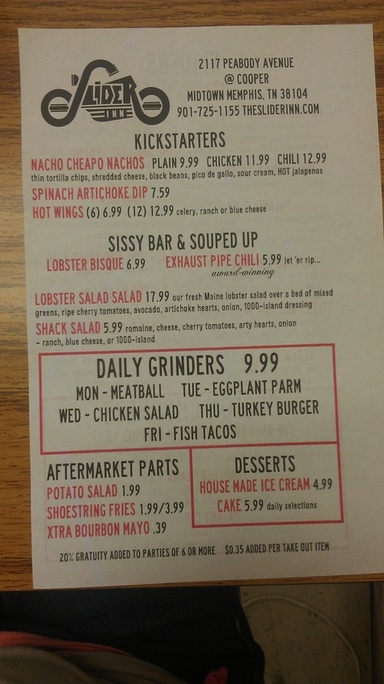 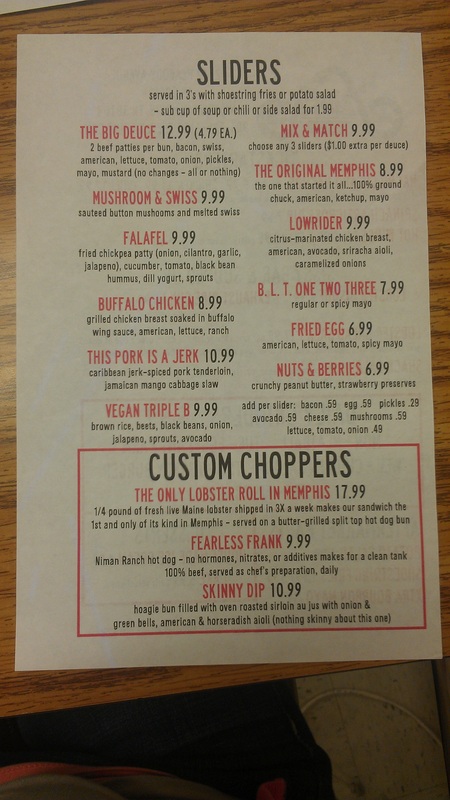