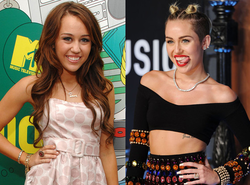 Miley Cyrus- 21 years old with over 16 million people following her on Twitter- perhaps is one of the most talked about people of our generation.

Her rise to fame came with the start of her very own television show “Hannah Montana,” and after that she went on to star in multiple movies and perform concerts all over the world.

In 2011 when the show came to a close, she also began changing. She was no longer the innocent child star kids grew up with; instead, she was transforming into what she would become in her adult days. If people thought her music video “Can’t Be Tamed” was sketchy, they were not ready to what was coming.

On August 13, 2013, a shocking photo of Miley appeared all over the media; her hair was chopped off and she had a blonde pixie cut. A few hours later she tweeted, “Never felt more me in my whole life.” Even though this iconic haircut set into motion Miley becoming more “herself,” students at Germantown High think otherwise.

Senior Danny Collins doesn’t think too highly of this pop artist and believes she is just sexualizing herself for pure revenue generating purpose.

History teacher and father of 4 children, Rob Thomas agrees with Collins and says that Miley’s actions are just a tragedy.

“Miley Cyrus is just like watching a train wreck in the process,” Thomas said.

On the other hand, few students support Miley and love this new persona she has created.

Seniors Jahnavi Jagganath and Grayson Harber both agree that Miley is “banging,” and Harber expressed that he feels like Miley is his soul sister.

From her days as Hannah Montana, to now- with her crazy style changes, her outrageous performances, and her newfound personality- Miley has obviously developed into an enigma of massive proportions.

“She knows what she’s doing. She’s getting all this attention and doing it on purpose because that attention fuels her popularity and success,” stated Areej Itayem, a senior.

Senior Richard Flowers said that the only solution to this Miley Cyrus phenomena is much like Britney Spears: all people have to do is leave Miley alone and let her live her life.

Whatever happens to Miley Cyrus in the years that are to come, people will remember different things about her. In the end, the main thing to remember that Miley still promotes to this day is that “Nobody’s Perfect.”